Gender imbalance of a different kind

I watched a program on Asianet recently. The subject was very interesting and I wanted to see what the modern Malayalee thought of the same. The subject in question was that women felt unsafe in buses in Kerala.

The panel consisted of a few educated, articulate young ladies one of whom was a very well spoken actress. On the opposite side were not people who held a contrary view, but men, mostly middle aged (and a few young guys too) who I observed were present only to oppose the view. Instead of this show being a discussion that concerns the entire society, it turned out to be a man vs women kind of a fight with the men opposing the view only for the sake of opposing. They had no concrete facts to support their argument and instead tried to dismiss the whole issue by trivializing it. It was almost as if, they opposed the ladies having a view point and more importantly a platform for airing it.

Not a single man sitting in the chairs behind the panel of men spoke up for their sisters, mothers, daughter, wives etc.

The debate started with the women articulating very eloquently and with a lot of clarity the experiences they had in Kerala buses. But if you think the men let them have their say, think again. The men merely shouted down the women, wouldn’t let them talk and when they expressed their opinion, it was so stupid that you wondered if they knew anything about the subject let alone any other subject worth discussing.

Then I remembered my posts on Kerala here and at other places like DOC where people landed up to defend anything written about Kerala that they did not like. They had no clue to what we were talking about but considered it their right to shout down anyone who says anything they do not endorse. It was almost as if they were afraid and angered by people having a voice.

What was surprising about this show was that there wasn’t a single man in the audience or panel who talked with some understanding of the subject or who knew how to participate or behave in a debate. Most of the men were only interested in opposing anything the women had to say and if possible making noises so that the ladies did not get to speak.

The moderator of the program can easily put Arnab Goswami to shame. Just when a lady was making a point in a clear and concise manner he would interrupt or pose another question to the men. Then the whole program would descend into pandemonium. It was the most frustrating thing to watch.

After a time I stopped watching because I just could not believe that grown up men could behave like this. One man went on to say that Kerala is the safest place in India for women. Another said that Kerala men were very decent and the fact that he wasn’t keeping his daughter as his wife was proof that he was a decent guy (believe it or not).

Then they went on to allege that women enjoyed the attention of men and that they invited it either by showing interest or by dressing provocatively. The discussion was not worth airing on a channel like Asianet. Even illiterate people from Bihar and UP know how to behave themselves better than the men from the 100% literate state that appeared in this debate!

What struck me most about this program was that the ladies participants in the program were way ahead of the men in etiquette, decorum, articulation abilities and knowledge. They took part in the discussion with dignity, stating their experiences in a matter of fact manner while the men just misbehaved as they had no point to counter the ladies and most importantly did not want the ladies to have a say.

And that is when it struck me that this was a very good spectacle of what women in Kerala go through, not only in buses but in life in general. The debate was an eye opener to the kind of people the ladies have to put up with daily.

All I got to say in conclusion is that the Kerala society seems skewed. On one hand we have the women, who are educated, progressive and intelligent, on the other hand they are dominated by men who are completely opposite to them in every aspect. A very sad situation indeed! No wonder the state is leading in divorces. How can women in such a society find partners who are their equals in every aspect!
Posted by silverine at 1:34 PM 11 comments:

A slice of life

I like Art movies. I like art movies for its deliciously stark portrayal of real life. It’s a relief from commercial cinema that has no resemblance to real life. I find Art movies refreshing. The more stark the reality the better. It is like a purge, a purge from the one sided vista, commercial cinema brainwashes you with, whether it is patriotism, family relations, poverty, love, and relationships… anything and everything and the way it is shown.

For people like us, who live in concrete cages, Art movies are like a bite of real life.

While growing upon a steady diet of Malayalam and Hindi movies thanks to my Dads collection, I learnt to look at life through pink tinted glasses. Elders were nice. Poor people were humble, grateful and loyal to their benefactors. Boyfriends sang songs to their girlfriends and girlfriends pledge eternal troth to their boyfriends. Husbands were pillars of the family and mothers, the foundation. And lot of other blah blah. 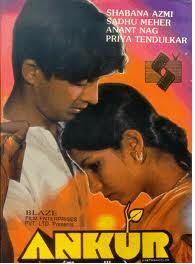 Then came Art cinema, the next item in my Dad’s menu and I saw my first “Ankur” like swallowing a bitter pill. A very bitter pill. I didn’t like it and wanted some nice mushy movie. But Ankur fascinated me. It raised a lot of questions that my folks had to answer red faced, perhaps cursing themselves under their breath for opening a can of worms.

That movie also taught my mom to get over the reticence of her upbringing and face her metro kid and tell her what adultery was all about. What landlords of yore were and the social system that existed in villages and between upper castes and lower castes, the rich and the poor.

Reality is a bitter pill to swallow and but it makes you feel so much better after that. I mean it felt good to see people with shades of grey unlike the black and white portrayal in commercial cinema. For very love story there existed ten of betrayal, for every good husband there were ten bad ones and for every chaste woman there existed many who were not. It explained a lot of things that puzzled me from real life.

Today I relish Art movies. They are like a sneak peek into the real India. A break from the untiringly nice Moms, as portrayed by commercial cinema to the woman who has needs and a personality and frailties of her own as shown by art cinema. I would say that Art cinema has its fingers on the pulse of change that is taking place in a transitional society like ours. And keeping us in touch with it.


What we need is more Art cinema. I think the public is ripe for it.

And with this I complete 300 posts at My Think Pad . Thank you for your support and interest :)
Posted by silverine at 7:03 PM 10 comments: