I have been tagged by Mathew and Alex. Rules of the tag, write 8 random things about yourself and tag 8 people. So here are some very boring facts about myself.

I am not fond of modern poetry, cannot understand it and hate people sending me their poetry for comments. And every one one of my friends is into poetry. If I see another one I will gag arrgh!

I love to cook and cooking gives me great creative satisfaction. The more complicated the recipe the better.

I have a green thumb and my garden at home is a treasure trove of exotic plants. Each plant is my baby and every morning, come rain or shine I check on them.

I never drink alcohol at parties though I love my White Wine and Rum and Cola. But I prefer to drink at home with my family or friends.

I am a good singer but stopped singing after people started forcing me to sing at every family gathering in front of people. I hate it even now when I see kids being forced to sing or recite poetry in front of guests. But when I am alone I do sing.I hum constantly.

I can read, write and speak in Malayalam. At home we speak Malayalam only according to parental diktat.

I am not tagging anyone as my last tag had some disastrous consequences and the women of Kochi are right now burning my effigy :(

Right now I am listening to this awesome song !!

On Sunday, a junior of mine from college Ritu, gets married. She is barely 21. While I am happy for her, I do feel sad that she would never get an opportunity to grow as an individual. She like many girls who have got married at her age, will never get to enjoy the freedom of being a single working woman. It is only when a girl starts working and become independent that her real personality emerges. The work atmosphere, responsibility and people who treat you like an adult unlike college and home, liberates the real you that is subdued and pruned by a sheltered upbringing an Indian girl undergoes.

Ritu’s parents like most Indian parents are worried that a girl if left unmarried too long will become too independent and will hence be unsuitable for marriage. And I suspect this is the reason she is being married off so early. A girl with individuality will not be a subservient wife which portends bad tidings for the marriage. Every effort is made so that the girl does not get to taste freedom and that she is transferred from the guardianship of her parents to the safekeeping of the husband. There is also the fear that the girl may not want to marry after being independent for some time.

While it was imperative for girls to marry a few years back due to the security blanket it provided, nowadays it is totally unnecessary to push a girl into marriage; especially since she will anyway grow as an individual and may soon find that her husband and she think in different directions. By getting a girl married early, parents are only increasing the risk of divorce as ‘divorce’ is not a dirty word anymore.

Indian guys on the other hand don’t face this problem and more or less retain their individuality while growing up while girls are taught to conform and willy nilly bought up in a "certain way". It is all about conforming, personal happiness be damned. When will parents learn? After the society is strewn with the carcasses of marriages? Why do we learn lessons the hard way? Why don’t we change with the times?

I wish Ritu a happy married life. She will need my wishes and a lot more in the coming years.
Posted by silverine at 5:22 PM 26 comments:

The truth is out there... Google for it idiot!!

One of the most lucrative professions of the future will be teaching people the knack of getting the right " search keywords". If you can master Google search "keywords" you can make millions teaching those who run from pillar to blog post searching for things from Paris Hilton underwear to Brad Pit sperm.Dont believe me? Just take a look at the "keywords" that bought some people to my blog today. Please do consider taking this up as a profession and you may just bring eternal rest to the bhatakthi aatmas of the cyber world. 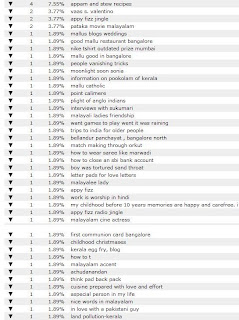 My little cousin sister from Ernakulam called up today morning. She was all excited. Her doggies, a Daschund and a Lhasa Apso had given her a puppy. Though she was disappointed that there was only one puppy she was nevertheles happy that she got a brand new puppy to play with.

Minu: Chechi my puppy is sooooo cute!
Me: You are such a lucky girl!!! How does it look like?
Minu: It looks like a loooooong Lhasa Apso
Me: Great! And what have you named it?
Minu: Dick!!!!
Me: What??? err...I mean how nice heh heh

How I envy her! I miss the days when a 'cock' was a rooster and a 'screw' was a hardware item and 'hardware' was...guess you know what I am talking about. Enjoy the freedom while it lasts dear Minukutty!
Posted by silverine at 7:09 PM 21 comments: