God Save His Own Country!

Here’s a marvelous compilation of painstaking research that will open the eyes of the so called Kerala defenders to the true state of Kerala. And here’s a comment by a commenter called Noble Paul that best explains the Kerala paradox and why the future is bleak for the State.

God Save His Own Country!

This New Year give a thought to the girls who are given a "One way ticket to Hell." Thanks to Aashik for the link!

All is not lost

The recession is beginning to hit home. Yesterday a cousin sister of mine got laid off. It was a devastating blow for this mother of teenage children. There was no warning and as per the terms of her contract she got her one months notice pay and they even allowed her to take leave for the notice period. Her Christmas was totally ruined. Luckily her husband still retains his job for now.

After the initial shock, the intrepid lady took a cool look at her situation and logged onto a popular job portal. She found several jobs. Though they did not pay the type of salary she was drawing, they were better then nothing. By evening she had an interview call and she is more than sure of taking the job though it pays her 45 % less.

There is a another scenario to this situation. My uncle a Small and Medium Scale (SME) businessman has been struggling to get good people for jobs for a long time now. The buoyant market made it impossible to take on even B grade b-schoolers. He just could not afford the type of salary they wanted or were being offered by big business houses. Today he is a happy man. He has not one but three MBA’s working for him at a salary he can afford to pay them. The MBA’s on the other hand are pragmatic and content with the 50% reduction in their salaries at the new job. They were similarly laid off, but seem strangely happy with their current situation.

The two examples taught me a valuable thing. That all is not lost. There are jobs out there though they may not pay very well. And people, who have lost jobs, should not despair but ride the gloom out with whatever is on offer. Depressions come and go and when the market is buoyant again, things will look up. We Indians are long used to frugality and depression should not be a scary word for us. Jobs are not disappearing. They are out there. Though they may be a lot less attractive pay-wise. But the economic boom has ensured that even at a lower price, jobs at still available for the taking! So take heart folks. All is not lost...yet! :)

Wishing you all a very Merry Christmas and a Prosperous New Year!

Flies in the soup!

This post from Praveen gladdened me. It gladdened me because it spared me some furious keyboard thumping of my own to let off steam. I badly wanted to write about the incident but I was too worked up to be coherent. So I am plagiarizing Praveen’s angst. That must be some first! :p

Much has been written about this utterly despicable episode. But in a way I am glad it happened. Glad because when politicians speak the truth, however occasionally it gives us a valuable glimpse into their mindset and thinking. And it is chances like this that will help us better understand this species. Yes, they are a species now of different hues and ideologies. Very different from other humans and in order to understand them, one needs ‘impromptu politically incorrect outbursts’ like this from them from time to time. It showed the man for who he is. This episode and another that happened a couple of years ago in college have coalesced to form an understanding of politicians in my mind. Let me share the same with you.

First Year College and we were part of an entourage of students and lecturers that met the Education Minister at the seat of power in Bangalore. The reason we met him is immaterial here. The minister was barely educated himself and when asked probing questions by the assemblage got hot under the collar as he had no clue and started shouting. Our English irked him more. After that the no one dared open their mouth as a minister is naturally feared for his power and the nasty things he can do to you or your family. Note the irony here. The PA signaled us to leave.

As we were leaving a group of villagers came to see the minister. The change in the minister was dramatic. He got up hands folded, a respectful smile on his face. He listened to them with humility and respect and a lot of show of attention and promised them action on some agricultural problem in some halli of Karnataka. They were perfect strangers but he gave them the respect given to a family.

Now if Sandeep Unnikrishnan was from a poor family, Mr. Politician would have been at his side in a trice. In fact most politicians from Gods own Country would have been jostling for space at his funeral. However Sandeep came from an educated middle class family. It is a class that is not happening for the politician. It is a class that is of no use to him as it does not vote and hence is not a threat of dethronement.

The poor on the other hand have nothing but a begging bowl of small grievances that can be patched up with a flourish and much fan fare and speeches to make him happy enough to vote him back to power. A pipeline here and an electricity connection there and viola…poor man is happy. His leader has delivered.

But the educated middle class? They are not happy with cosmetic applications!! They want infrastructure improved. They want accountability for their money besides they know English and the minister or MLA cannot argue with them and hope to win with words or a water tap and a lamp post alone. The temerity of the people who don't matter. Appalling! And why do we not matter, because we don't vote. Simple!

Therefore Mr. Chief Ministers arrival at Sandeep’s house and valuable time wasted to visit that house was just a formality. I am sure he detested the hypocrisy. Poor man! Do you think the public outcry will affect him? It will not and he knows that. He has already granted favors big and small to people who matter. We the unvoting junta can scream from our plush air conditioned cubicles. He cares two hoots. We don’t matter. And that’s the simple truth.

Politicians serve those who serve them. We, with our educated sneer and classy contempt are nothing but a bunch of emasculated populace who make impotent noise in the media and blogs. This is why a post like this will remain what it is at the end of the day…mere text. Because I come from a class that has no power or wont exercise their power.

Mr. Politician will notice us the day we start exercising our franchise. Till then we will remain mere pesky flies in his soup.

( Just heard about his apology under pressure to resign) 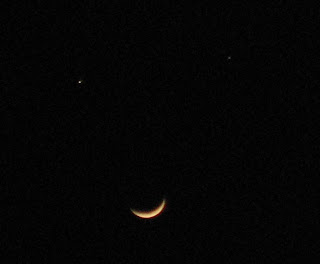 An SMS broke the late evening calm in Bangalore. "Look at the Moon" it said. We all rushed out and this is what we saw. It was the heavens way of saying "Smile India! We know you have had a hard weekend!!"

Thank you Mr Moon and Miss Stars!! You just made our day err night! 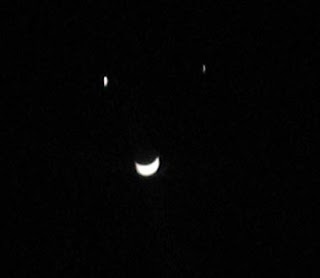 Read how the government has been De-patilled for our safety! :p
Posted by silverine at 10:37 PM 13 comments: